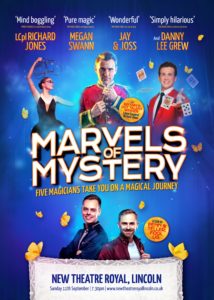 2022 has been an incredibly busy year for Danny Lee Grew. Highlights include a festive run of The Magic Circle Christmas Show in London before touring with Marvels of Mystery all over the UK. He performed in the live production of the BBC TV show ‘The Good Old Days’ at the legendary City Varieties Music Hall in Leeds.

Bookings for 2023 are already underway in so if you are looking to add some magic to your event, then please do not hesitate to get in touch.

Danny is available for most events:

– On stage with his full magic show, suitable for family audiences.

– As a guest spot in a variety show, with shorter segments lasting from 10 to 20 minutes.

– Or even as a MC (magical compere) to your show, awards ceremony or corporate event, using the magic to cover any time you need filled between items.

To get in touch, fill out the form in the contact section or send us an email to mail@dannyleegrew.com

No live dates at the mo... Please check back soon

A.I.M.C – Associate Member of The Inner Magic Circle with Silver Star for performance, highest level obtainable by examination into The Magic Circle.

Danny Lee Grew is a British comedy magician. His magic has taken him all over the world to France, Spain, USA, Ireland, Kuwait, Turkey, Bahrain and of course, up and down the UK.

Despite Danny’s young age, he has built a strong foundation in entertainment as a magician, including starring in summer variety and touring theatre shows, as a support act for many comedy stars, comic lead in pantomimes, and headlining at holiday resorts, on ships and at corporate events.

It all started at the age of 10 years old when he joined the Young Magicians Club (the youth initiative of The Magic Circle). At age 18, he passed his exam to become a Member of The Magic Circle and was then promoted to Associate Member of the Inner Magic Circle with Silver Star for Performance. This is the highest level obtainable by examination.

He recently completed a UK theatre tour called ‘Marvels of Mystery’ starring alongside BGT winner Richard Jones. He also starred in the live production of BBC’s ‘The Good Old Days’ at the legendary Leeds City Varieties. He remains as one of The Magic Circle’s most popular performers for their public shows and in 2021, he was handpicked to host The Magic Circle Christmas Show…a annual festive tradition in London’s West End since 1967.

Click Resume at the top of this box to see Danny’s full credentials.

This young man has fast and dextrous hands and some lovely moments of clever deflection. A performance here, possibly with universal appeal for this brand new solo comedy attraction.

Always impresses and ASTOUNDS… his uniquely bubbly personality leaves his spectators with no choice but to smile.

His performance is amazing... his ability to entertain, thrill and hold the attention of an audience is second to none. We will always hire him for future events and anyone who hires him in the future will certainly not be disappointed.

Nicola BarrattVice Chair of The Hub

Thank you for your splendid entertainment at our Charter Night event. Your blend of comedy and magic helped round of a successful evening and I received many compliments from our members and guests.

Get in touch, leave feedback or ask a question, complete the form below to send us an email.